Skip to main content
September 29, 2016
Happy Fall!  :)
I'm not quite sure where September went, but it's nearly gone. Here on the farm, we are ending our poultry harvest season and enjoying the 'break' before crop harvesting begins.  I say 'break' because there is always something to work on on the farm.

We started school a couple weeks before Labor Day, and since then, the days have seemed to fly by even faster than usual. The weekend after Labor Day the kids and I were able to take a weekend away with my family to a great little campground only 2 miles from Lake Michigan. 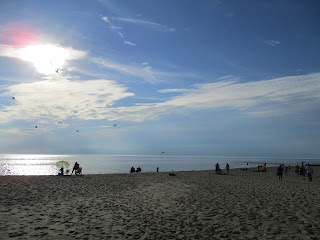 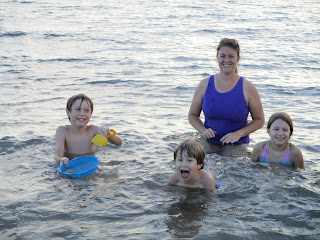 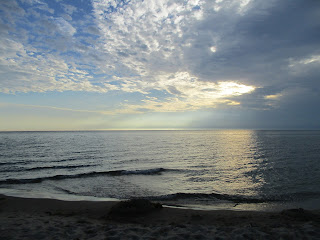 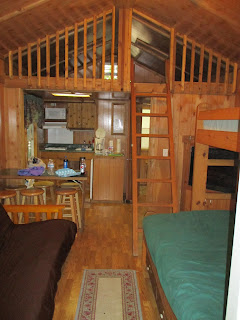 The cabin we stayed in at the campground.  I'm too much of a wimp to tent camp.

The cabin was a great option. Reasonably priced, beds to sleep on (unless you slept in the loft like the kids), kitchenette, and coffee pot. My cousin got married that weekend by Silver Lake, so it was a great reason to find a campground and make a weekend out of it. The kids discovered that they really enjoyed kayaking (as did I), so a couple weeks ago we had "gym class" and went kayaking with my parents at Motz park. I see more kayaking time in our future.

Canning Season
The garden has kept on producing, especially with the warm September weather. We have been enjoying lots of tomatoes, corn, cabbage and green beans, and I've been working at preserving much of it. 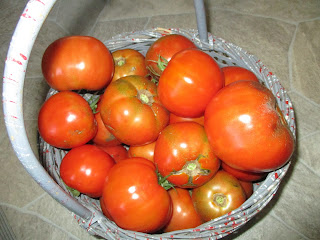 My typical every other day haul of tomatoes. 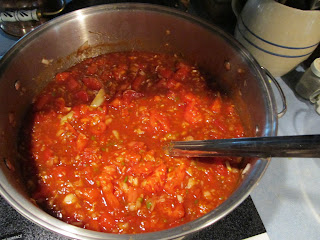 Salsa simmering on the stove 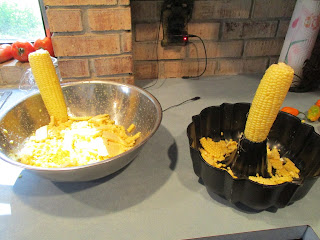 Two ways to cut corn off the cob.

I tried the option on the right with the corn stuck in the middle of the Bundt pan, just to see how it worked (perhaps you've seen the idea floating around on the internet). I concluded that it really didn't save a lot of time, as I kept having to turn the pan around while I was cutting. I prefer just cutting the corn off into a bowl, so that's what I stuck with.

Funny garden story:
So, I didn't keep track of what pepper plants I planted... next year I'll write it down. Thinking I had planted the mild peppers like the ones in the salad at the Olive Garden, I sliced into one, and tested it with my tongue (just in case it was hot). Well.... it was hot.  Very, very hot.  My mouth was on FIRE. These were not the sweet little peppers I thought I had. It took coconut oil, milk, and an ice cream bar to finally take the heat off my lips. Later on, one of our meat customers came to pick up some meat, and I was telling him about these peppers and asked if he wanted any. I gave him some, and he looked at them and said, "Jen, those are habaneros." Huh. No wonder they were so hot! I did end up making some (very) hot sauce with them, and a batch of hot salsa, but have ceased deciding that I would like to try a taste of the pepper alone. (I still have some habaneros if anyone would like any...)

New Projects
The landscape is starting to change here at the farm, and will continue to change over the next few months. It's time for the silos to come down and be replaced with grain bins. We also sold one of the corn cribs to make room to widen the driveway. It's kind of sad when the old stuff has to come down to make way for the new. The silos are still standing for now, but the corn crib in the foreground has left. 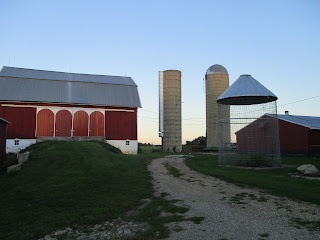 The view that was 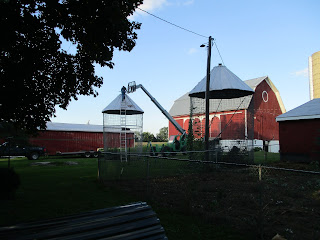 Corn crib in the process of leaving

One of my projects that I've taken on is the rock/junk pile that sits near where our pastures are. My sister and I started digging through it this spring, and now I have picked up the task again. I am giving the landscaping around the house a makeover and using many rocks to do so (I love rocks). I forgot to take pictures of the pile, and of what I was doing around the house. I've been enjoying digging through the rock/junk pile to see what 'treasures' I can find. Plus, it's a good workout. I was very excited the other day when I found a pudding stone. I'll have to post a picture of it next time.

Although our poultry processing is done for this season, we will continue to offer our pork by the piece throughout the winter, and also have several half/whole pigs available for your freezer. Let us know how we can serve you!