We have new babies!  Daisy had her litter late in the evening on Sunday, September 6th.  She had seven little beauties.

Kevin and I both had our guesses as to when she would farrow.  I had guessed she wouldn't make it through the weekend.  I was right, but barely.  The last piglet was born about quarter to midnight.  :)

Here is Daisy in her "nest." Before sows farrow, they make a nest to have their litter in.  Daisy made herself a nice one. 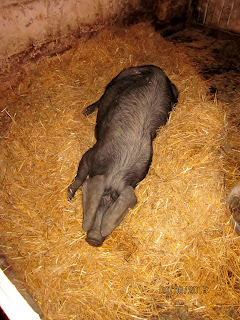 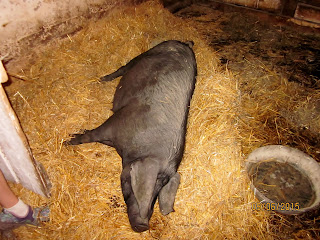 A few days ago while checking on Daisy, I found out that she LOVED to have her belly rubbed. It got so that anytime I went in her stall she would flop over on her side so I could rub her belly.

So, following are a couple pictures of me rubbing Daisy's belly and checking to see if her milk had let down more. 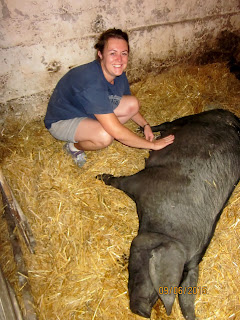 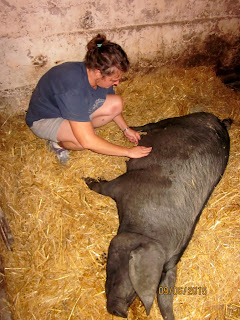 Kevin and I checked Daisy around 10 p.m., seen she was getting closer, and decided to wait another hour before checking her again.  We actually went to bed for a little while.  I set my alarm for 11, then got up and went to the barn. Piglet number one had arrived.  I went back to the house and woke up Kevin and the kids (they wanted to watch too), and said "we're pigletting!" (...no, you won't find that word in a dictionary anywhere). 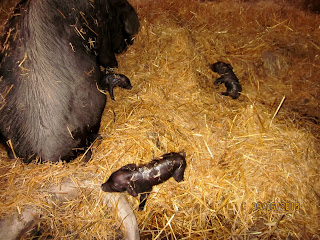 First three piglets out.
Daisy is getting ready to turn to her other side.  Pigs have two sides to their uterus - once they finish delivering on one side, they turn over.  Daisy had three on one side, and four on the other. 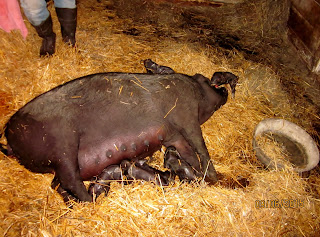 Babies getting ready to nurse 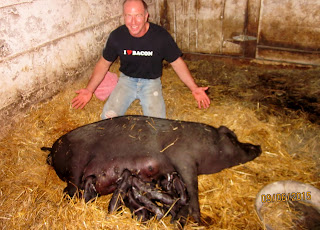 Kevin dressed appropriately in his "I Love Bacon" shirt 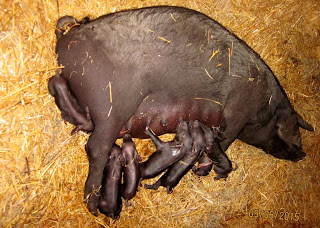 Morning is coming soon.  In actuality it's already here. When the sun comes up, I'll be greeted by some beautiful Morning Glories on my way out to the barn.  Happy Monday everyone! 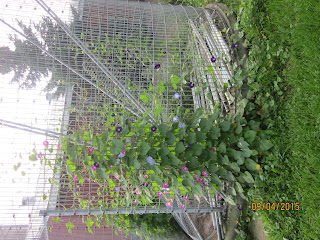 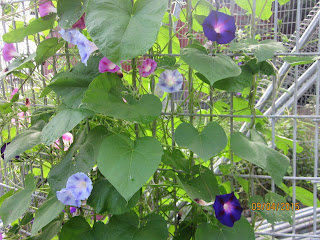