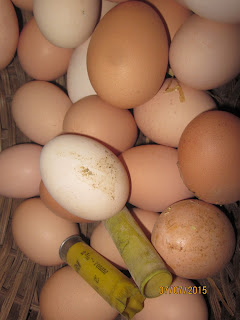 What is wrong with this picture?!  Who collects spent shotgun shells with their eggs?  Me, if you had to evict a skunk from the chicken pen when you collected eggs.

I spent my first night on the farm alone while Kevin chaperoned Wyatt's 4-H trip to the USS Silversides on an overnight expedition.  They had a great time, by the way.

I thought I would have a fairly easy night, seeing that Kevin had prepped all the animal chores for me before his departure.  I spent most of the evening unpacking boxes, then took the younger two kids out for dinner.  When we got back I started doing chores.  I noticed the chickens were squawking quite a bit when I got out of the car, so I made sure they were my first stop.  As I approached the door to the coop, I noticed something black and much furrier than a chicken on the floor by the nesting boxes.  After a closer look I realized with sudden dismay that it was a skunk.  Eating eggs.  IN THE BARN.  Of course there would have to be wild animal problem on the ONE night that Kevin is gone. But, no problem.  I've been wanting to do some target shooting for a while - this just wasn't how I pictured it going.

Now, it is dusk, and we don't have lighting wired in the pen yet.  I hightailed it to the house, grabbed my 20 gauge, 4 shells (because one should be enough, right?) and a flashlight (because darkness is quickly approaching).  I made it back out, and the skunk hadn't moved yet.  He was still happily ingesting his last meal.  I try to balance the flashlight and the shotgun... it's tricky.  First shot - missed. Second shot - thought I had him, because he flipped over onto his back and wasn't moving - much. I waited too long.  He flipped back over and started looking for a way out.  Must have been a narrow miss. I also missed on the third shot because it is hard to hit a moving skunk in the dark . (Not that I'm trying to make excuses here, but it is rather embarrassing how many shots it took to get this thing).  At this point, I am extremely thankful that nothing has ricocheted and that I haven't gotten sprayed directly by the skunk.  It is also at this point, the stench in the barn is becoming quite overwhelming. The chickens keep cheering me on - they want this thing OUT of their barn. Shot four was the best one (thanks chicken cheerleaders!), but now I am out of shells.  I now have a fatally wounded skunk in the barn, and no more shells. I ran as fast as my legs would carry me to the house to get more shells. The fifth shot finished him, and probably exploded the scent sack as well. Did I mention how bad the smell in the barn was already?  Well now, it is worse.  MUCH worse. The smell is so bad that I can taste it.  It feels like I am eating skunk. And now I have to recruit Norah and John to hold the flashlight and the door so I can remove the unwelcome guest from the pen.  They were very much unimpressed with the smell and barely made it through the task without gagging. I can hardly blame them. After too many minutes smelling skunk, tasting skunk, and being surrounded by stench, I finally cleaned up the coop, gathered eggs, and made it in.

The verdict is still out if the clothes I was wearing are salvageable.  I think I'll leave them on the clothesline for a week. My boots will never be the same.