Happenings
I started writing a blog post a couple weeks ago, and then never did get around to publishing it.  A lot has happened since then, so now I am going to start over and include what I wrote in the other post as well.  My father in law, Bob Wilcox passed away on June 14.  This was a little unexpected - we did not think he was going to pass quite so soon.  My mother in law passed on April 13, so they only passed away about 2 months apart.  If you ever met Bob, you would remember his very strong handshake and big smile. He was a great guy, and he will be missed.  In honor of his Dad, Kevin drove one of the antique tractors down to the funeral.  I have to admit, I got pretty choked up watching him get it out and clean it up for the funeral. 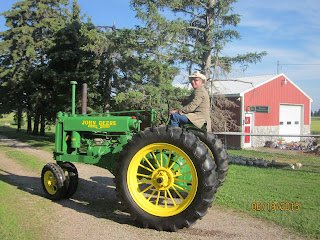 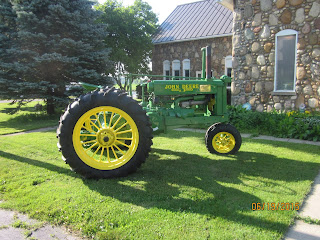 What a whirlwind of a spring it has been with the passing of both of Kevin's parents, moving and trying to get re-settled.  We are not settled yet, and probably won't be completely settled for a few more months yet. Kevin's standard answer to the "are you getting settled?" question is 2-5 years.  I am optimistic that it will be less than 2 years. If you know me, I am an organized person, so this whole moving and not being unpacked (or finished moving) yet thing has been pretty hard for me.  But, I am trying to make the best of it and have some sort of semblance of routine.

Mulberries
This morning I canned mulberry jam.  I LOVE canning.  Last week when I was mowing I kept having to drive under this tree with berries on it.  I came in and asked Kevin what kind of tree it was (he knows since he grew up here).  He said "you've never eaten mulberries?!"  No, I hadn't.  Now I have.  They are delicious.  I am very excited about the jam.  The kids and I will be heading back to the fencerow this morning to pick more.  :)


Crops
Soybeans (for a story on how the soybeans got to the farm, keep reading....)
The soybean story -
Getting the seed to our farm proved to be an interesting experience.  Kevin took the day off from his day job to go up to Carson City to pick up the seed.  He got there around 8 a.m., thinking he would get an early start to the day.  At 8:40 I get a phone call.  "well, I'm all loaded up, but the truck won't start.  You're going to have to come get me."  Ummm..... okay.  We finally decided that I would drive our truck up and bring some tow straps.  I was unwilling to attempt hooking up the trailer... I believe my quote was "isn't there a guy that could come do that?"  Since time was of the essence (isn't it always?) plan B was put into action.  I loaded up the kids, and off we went to Carson City.  We got the truck hooked up (Kevin had used his Dad's truck to go get the seed), and Kevin said, "which one do you want to drive?"  Now, I wasn't even thinking about THAT part of this adventure.  Since driving the running truck seemed like the easier job, I took that.  I freaked out momentarily when Kevin said he would be the brakes, and that we would take the highway and go 50-55 mph home.  It all ended up working out, and we made a smooth trip home.

A few days later, a friend of ours brought over a load of sand for our chicken coop.  While he and Kevin were talking, Kevin realized he didn't put the transfer case in neutral on the truck we were towing.  Whoops.  Thankfully, the mechanic who fixed the fuel pump on the truck said that the transmission seemed to be fine.  Whew.

Corn (this seed made it to the farm without any mishap).  :) 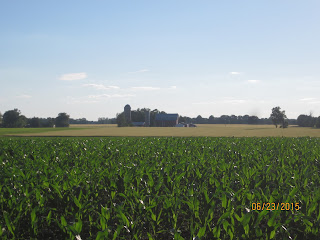 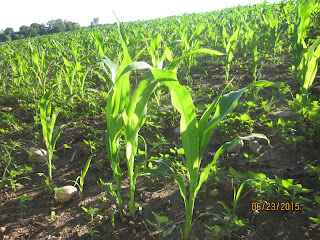 View from the back of the farm.  Picturesque. 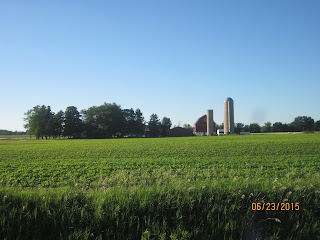 School's Out for Summer!
We wrapped our school year in May and had an open house to show what we worked on through the school year.  It was a fun way to end the year.  And, looking through all of our stuff, it was encouraging to me to see how much we worked on and learned through the year.

We are all enjoying the break from running around doing all the school-year type things. The kids played cowboy a bit ago, complete with proper attire and their cap guns. Cookie (a.k.a. Mom) prepared them a meal of Beans & Cornbread.  They had a blast. 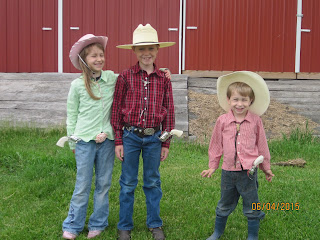 Garden
The garden is in, but it too is weedy.  I have resolved myself to be okay with the fact that the garden may not look pretty this year, and that is okay.  With as much as we have had going on, that is the way it probably will be this year.  And, having to start a new garden spot means we had more weeds to start with too.


Growing
The piglets are growing and thriving.  We are THRILLED with how well Penny, our mama has done.  She has been fantastic, and so we decided to save one of her litter back for a future breeder.  Here they are: 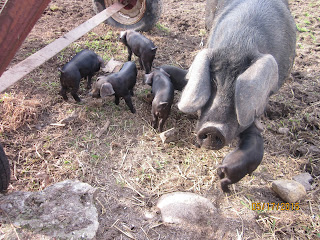 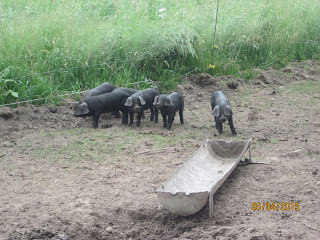 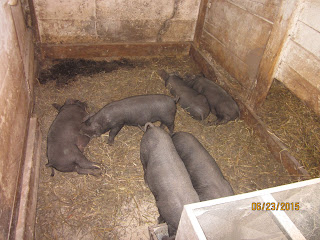 Fat little piggies.... yes, the one is trying to nurse off the other one... pigs are funny,  What a difference a couple weeks makes in their growth!

Nothing beats a mud bath on a warm summer day... 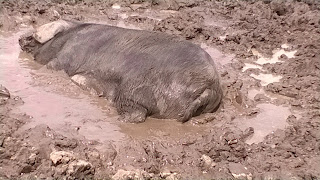 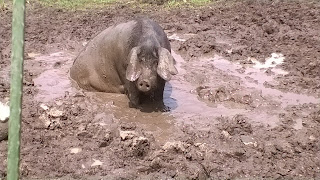 Our first batch of meat chickens is doing quite well, and at this point it looks like we may have a few extra to sell.  :)  This batch only has 4 weeks to go. 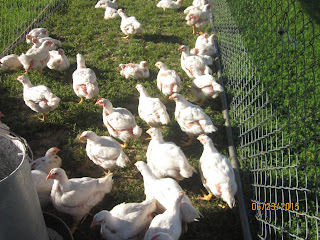 We were expecting a littler of piglets a couple weeks ago, but sadly, that never came to fruition.  We are not sure what happened, but our sow Rue never littered.  :(  We have high hopes that this guy - our new boar, Boss - has bred two of our girls. 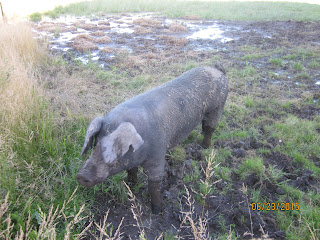 We do have some new babies at the farm though - kitties!!!  Norah was given two kittens for her birthday.  They are named Kitty and Cutie 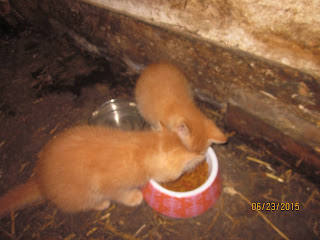 And, we found another kitten in the straw barn.  John has adopted it and named it Meowy.  John even took the picture  :) 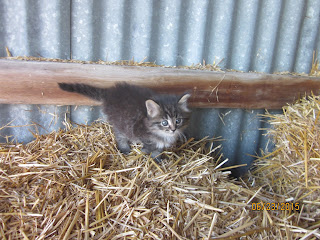 Kevin got some hay baled before a rain a little while back.  He didn't get all done that he had hoped, but it is a start. 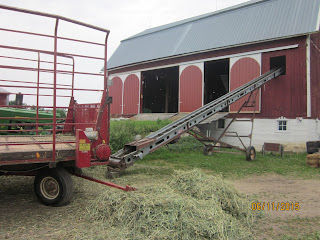 I realized that I have never posted about our grinder/mixer - the Bear Cat.  Kevin acquired this piece sometime last fall/winter - I really can't remember when.  It saves us from having to haul our corn to the elevator to get ground and mixed.  So far it is doing its job.

A couple other projects we have been working on:
After attending a pasture walk at some friend's of ours, I decided that we really needed a fire pit area at our farm too.  I went down to the neighbor's and asked if he had a spare tractor rim sitting around (thanks Don!), put it in my trunk (yes, you read that right) and happily hauled it home.  Kevin helped bury it in the ground, so now we have a nice fire area.  :)  I want to use tree stumps for the seating, but I don't have that part of the project done yet. 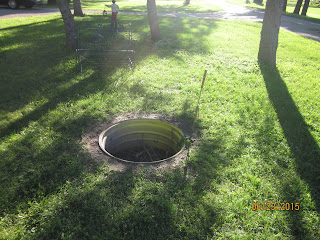 Yesterday I tackled some yard work, and getting the doorway to Kevin's shop cleaned up.  I realized while working that I should have taken some before pictures, but, oh well. Hindsight is always 20/20.  Here's the finished product: 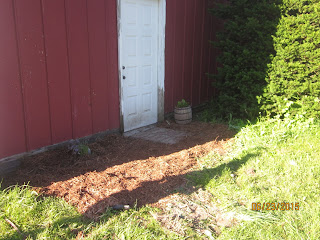 Before it was all nicely mulched and cleaned up, there was a half-dead overgrown bush there.  I put on my buff farm-wife cape and used the truck and a chain to yank it out.  It wasn't nearly as much fun as it should have been.  Since the ground was so wet, the truck didn't even have to work.  I strapped the chain around the bush, and drove forward with the truck thinking, well, I don't think that did anything.... Wrong.  Bush pulled out, roots and all.  The last time I pulled a bush out with the truck it took a little doing.  Not so this time.  I pulled a bush out by the road too, and, same deal.  The truck did it effortlessly.  Next up, some painting projects outside.  Kevin says I could paint the barns and a barn roof..... I draw the line at roof painting jobs.... we'll see what the day brings.  :)

4-H fair preparation season has officially begun. The kids have been working on projects and getting them ready for fair.  Sadly, no poultry can be shown at fair, but Wyatt has still taken great care of them and is working on finishing up their new mobile pen. 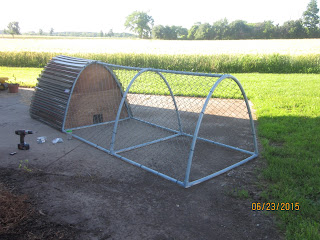 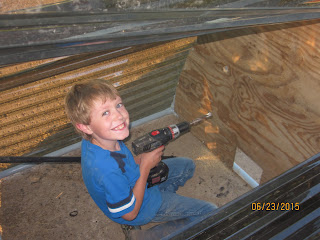 Remember to count your blessings - and cherish those around you.  Life is precious, and we are grateful for all the friends and family that have helped us get through the tough times and savor the good ones.  Take care, dear readers!