My Mom found this book in some of my Grandma's things.  My Grandma Haviland was also a farm wife.  This book is a gem!  I have found so many of these stories not just relatable, but true!  One of my favorite and most often referred to stories as of late is called "Farmish...Is It Anything Like English?"  In this story, the farm wife talks about how farmers can sniff out implement dealers with the greatest of ease. Here's a bit from the story.  "There isn't a farmer alive who isn't able to sniff out a dealership [or implement sitting on the side of the road] within a 5-mile radius.  They'll drive for 2 hours in circles sure that it's there somewhere.  It has to be - it was there 20 years ago when they were in the area for a farm auction.  That in turn allows you to hear what they bought that many years ago.  They'll excitedly point out the farm, tell you how much more they paid for the machine than they should have and how sorry they still are that didn't buy that manure spreader that was for sale that day, too.  About the time you have a headache, they spot the dealership and brake down to 10 miles an hour on a main highway so they can get a good look at the machinery, deciding whether it's worth stopping for a closer inspection."

I have experienced this sort of travel... perhaps not the driving around for 2 hours to find the dealer, but a trip that takes a different route home because there is an implement dealer there.  Or a couple extra stops along the way to our destination because "there was equipment out in the yard for sale there."  I think the other day I could have written a chapter in "Why Far Wives Age Fast Volume 3...." called "Who needs to exercise when you have pigs?"

It was morning.  I was almost done with an exercise video when Wyatt runs in the house and says "there's a pig in the chicken pasture!"  Knowing the good temperament of our pigs, I told him that I would be out in a few minutes to help him get it back in.  By the time I got out there (which was less than 10 minutes, perhaps even 5), Wyatt had shut the door on the barn that the chickens go in and out of (good thinking, son!), and had the pig back in its proper pasture.  But, all problems were not yet solved.  The pig got in the chicken pasture because it was running under the chain link fence.  Yes, UNDER.  Under and through.  Have you heard that pigs are smart?  Well, if you didn't know, I can enlighten you.  They are VERY smart. The pigs figured out the fence was not as secure as it should have been and was rather flexible.  I did some thinking and figured that the fastest fix would be to zip tie the chain link to the fence posts, since the ground is frozen solid and there is not really any hope of driving in more fence posts at this point.  While I am trying to stretch fence and zip tie it onto the posts I am thinking to myself and goodheartedly writing a narrative... "Why Farm Wives Age Fast Volume 3....you have to come out in the morning, before you eat breakfast, and fix fence, while the pigs watch you do it..."  I got the fence almost mended when I look up and see a much larger pig in front of me - one that should not be there, mind you.  Boy broke through the gate and just had to get in with the young pigs.  He can sniff out when one is in heat, and once that happens, you have on your hands one determined pig. So, I continue my narrative.... I am now having conversations with pigs that I never thought I would have.  I tried, unsuccessfully to get Boy back in his proper pasture.  He wouldn't even come for food. I lured him over to the gate, and he stuck his head through, looked at me, looked at the sows happily eating an unexpected snack, looked back at me, and backed up to where he shouldn't have been.  I followed him back in, and tried to lure him again.  I got him near the gate and tried pushing him over to it.  This time, he started talking back, and knowing the strength of this animal, I decided to leave well enough alone and not make him angry.  I don't think he would ever intentionally hurt any of us, but I didn't want to take the chance.  Only minutes before I watched him lift the gate up with the greatest of ease - the gate that I had to work at to even budge.  So, I went back to mending the fence, told the pigs to stay where they were supposed to, and told Boy that I gave up trying to get him back over and would let Kevin get him back over later.  Boy went back in the pasture quite easily for Kevin.  Figures. 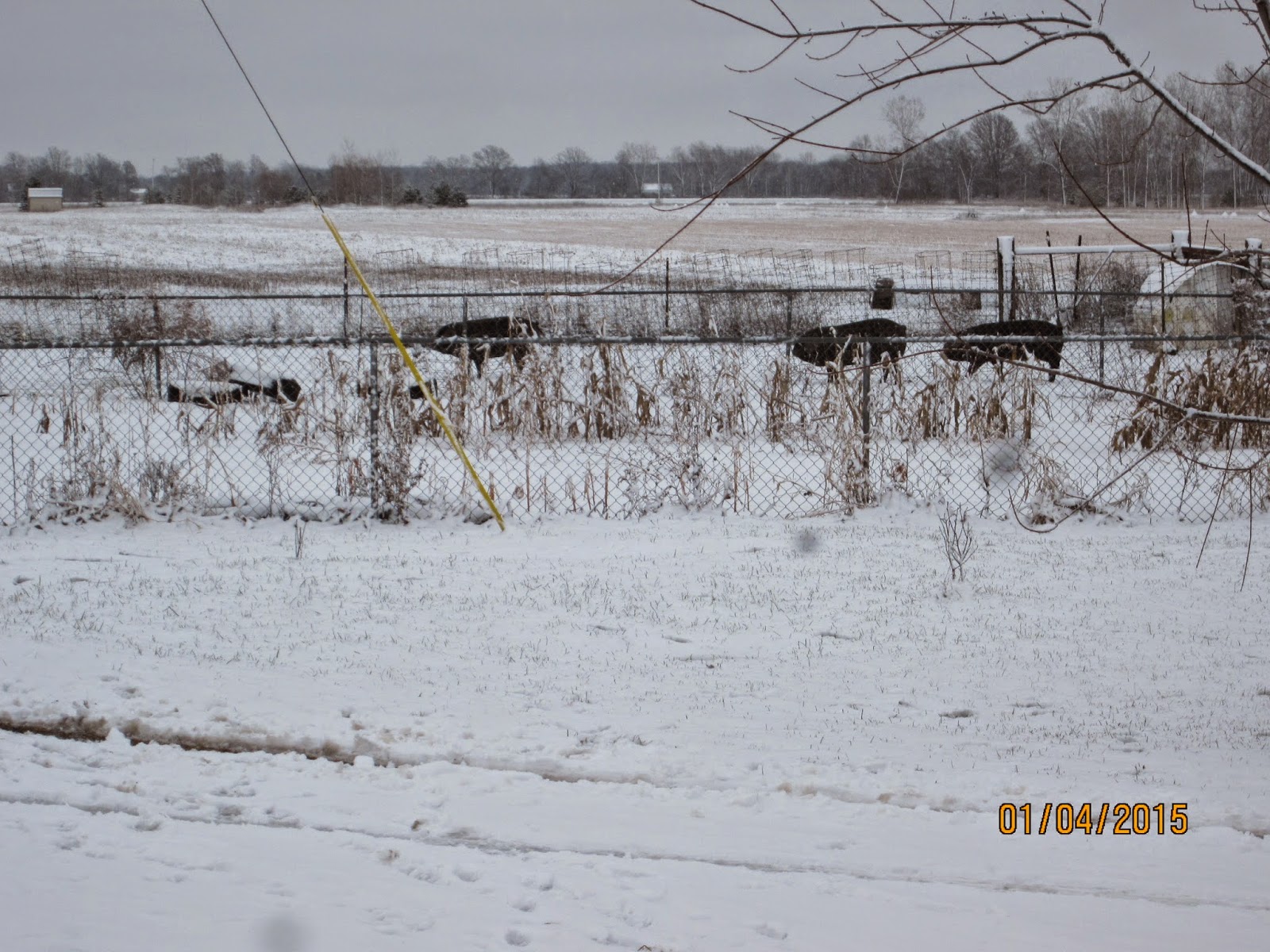 Even in the wintry weather, the pigs venture out.

I tried an experiment for the winter with apples.  It didn't work out as planned.  I tried storing some apples in coolers on the front porch.  They froze.  So, when life gives you frozen apples, make applesauce!  They didn't go through the peeler/corer/slicer as nicely as the non frozen variety, but it still worked well enough.  And, we had nice warm applesauce for dinner.  :)

We took the first batch of our pigs to get processed the week before Christmas.  We had a bit of a disappointment when our butcher told us they were too fat, and he mentioned that *gasp* that there might not be any bacon.... yesterday I had a most pleasant surprise when I brought home our meat to try.  There was bacon!!  Beautiful, tasty bacon.  Of course, the first thing we tried was the bacon.  It is a bit fattier than our other pork has been, but it tastes amazing.  Our butcher did an outstanding job smoking it, and as I quoted while munching on it "There's no shame in that bacon!"  Tonight we had pork chops, which were also outstanding.  Next up, sausage.

One of the nice parts of winter is that the birds, specifically the woodpeckers feed at our feeder daily.  We have a pair of red bellied woodpeckers, and we have enjoyed watching both the male and female feeding.

Tonight it is extremely cold, and I can't bear to be out in the kitchen unless I am moving.  So, I have clean floors, clean cupboard doors, and clean dishes.  I have kept up on the laundry amazingly well this week.... the hampers haven't been overflowing, which is a first in many weeks.  It could have something to do with the fact that our dryer vents inside and provides an extra source of heat....

Until next time, I'll be sitting close to here: 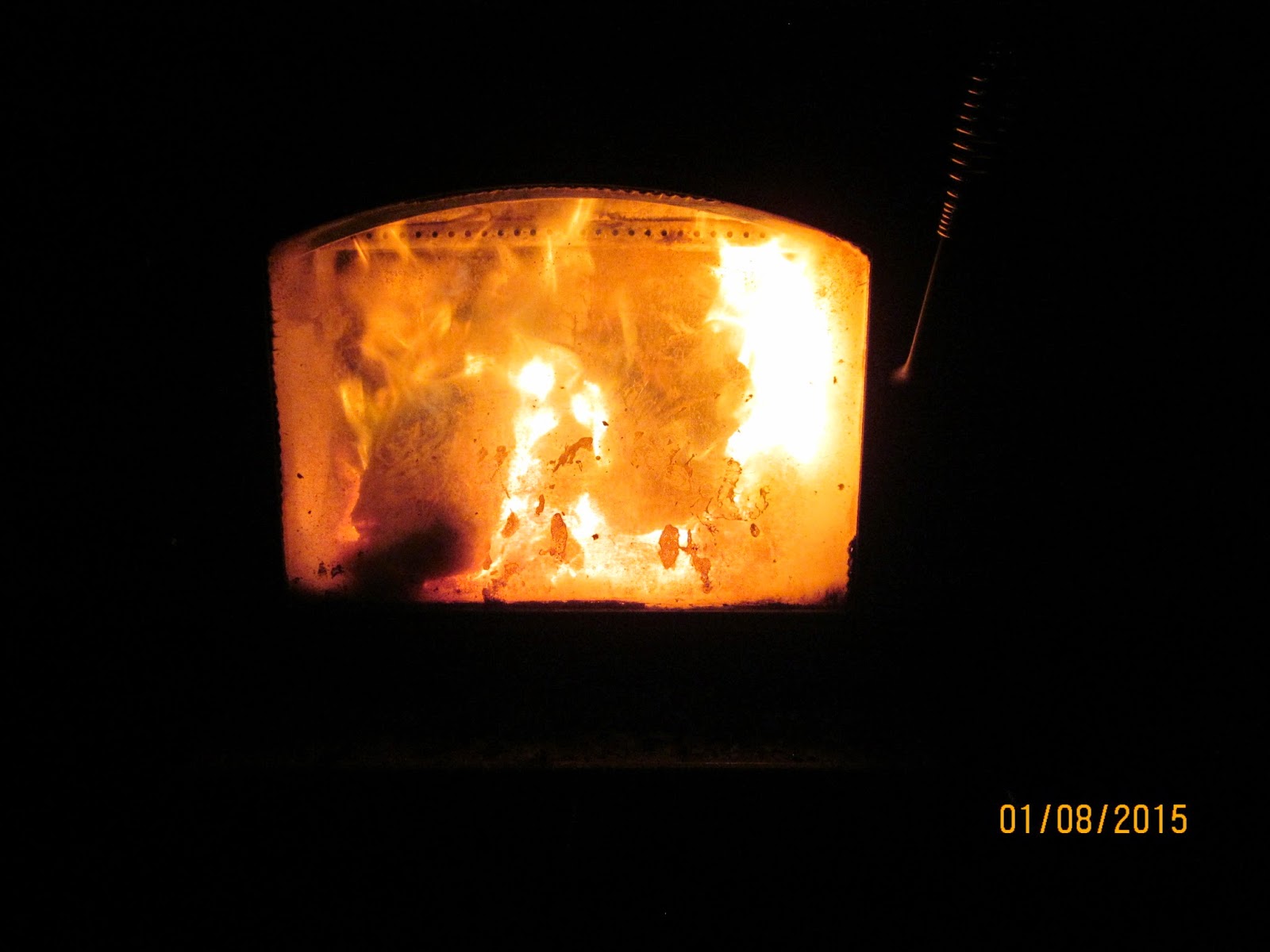