I think that "never a dull moment" could be the theme of life here on Wilcox Heritage Farm.  :)

Last week we all enjoyed spring break. Kevin had the pleasure of going to the Upper Peninsula for work for the first portion of the week. He got to travel all the way to the western edge of the U.P. and back. While Kevin was on his trip, the kids "camped" in the living room. A couple of them slept both nights in the tent. Since it was chilly in the evening, we even had a "campfire" in the wood stove.  One of the pleasures of indoor tent camping included watching movies and eating popcorn.  :) 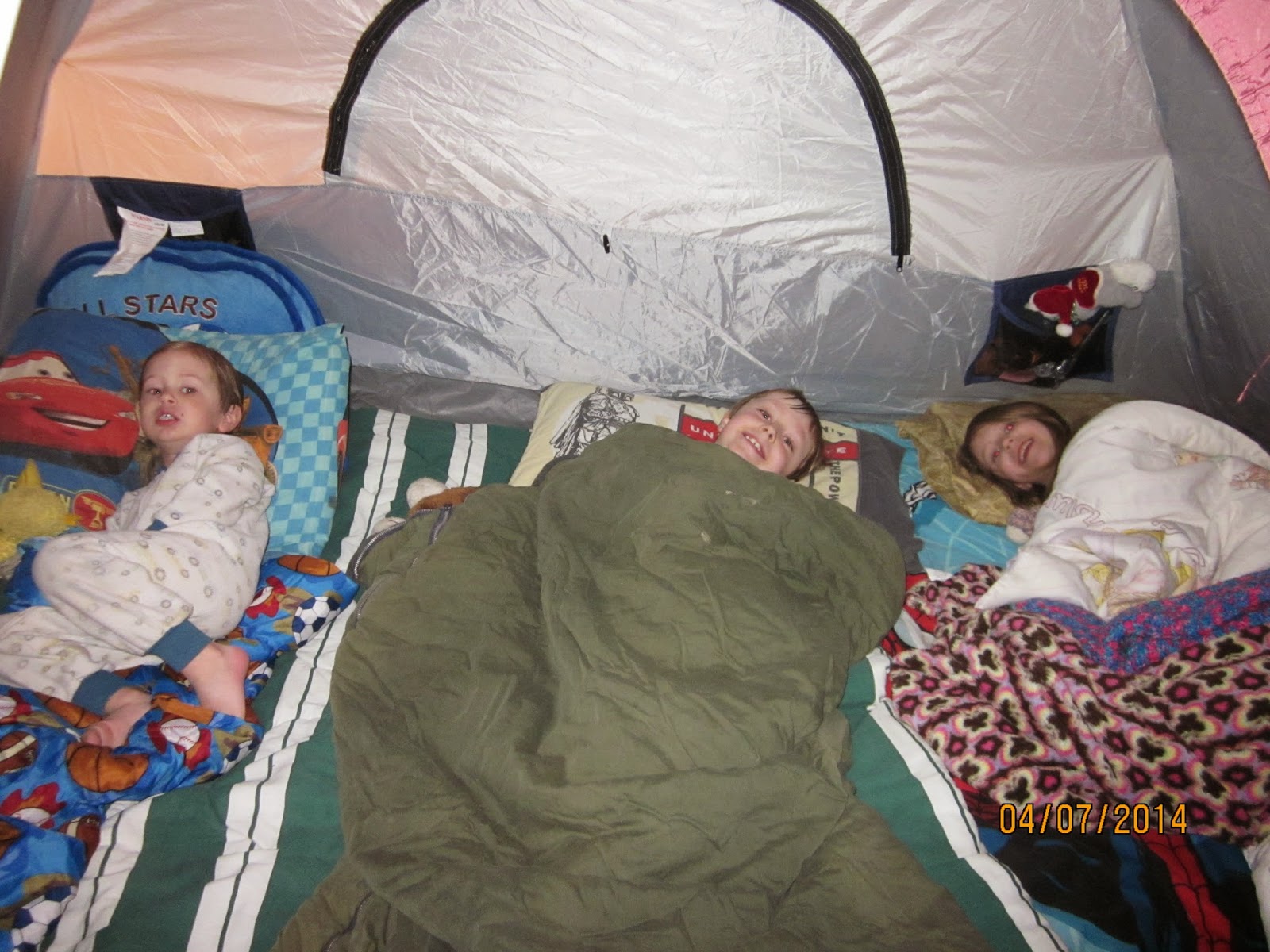 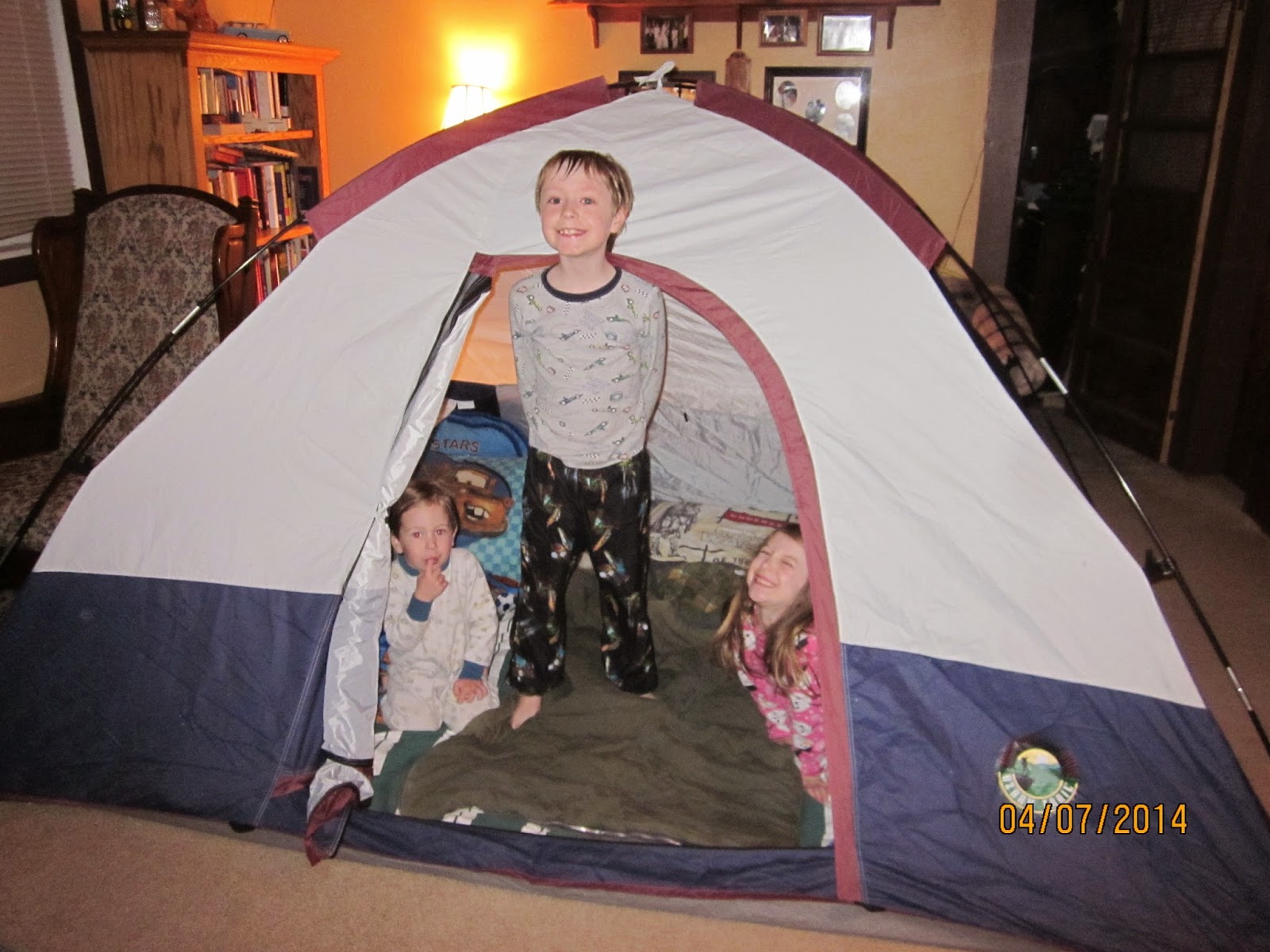 While Kevin was away, I was tasked with feeding the animals morning and night.   For the most part, it went very smoothly. But, I was a bit nervous about having to go in the pen with Boy, since he is over-friendly at times. There is no way to avoid going in the pen with Boy - one of his favorite past times is dumping his water and then tossing the water dish around. So, chore time includes finding the water dish and refilling it - not so easily done if you have a boar following you very closely around his pen. I found a way to keep Boy occupied while I played fetch the water dish.  If he left his feed dish close to the edge of the pen I would dump the feed in and then go refill the water while he was eating. This also proved to be a challenging task as Boy likes to toss his feed dish around the pen. One afternoon after arriving home I noticed Boy tossing something in the air.  My first thought was "oh no, there was a chicken in the pen and now it's a goner..."   Later investigation revealed that it was only his feed dish. That was much nicer than finding out it was a chicken! The day Kevin was due to arrive home I discovered that once again, Boy dumped his water. I had been opening the gate and entering Boy's pen through there (Kevin just climbs over the gate).  But, I could not get it unlatched this time. This filling the water pan adventure was a bit more exciting for me.... I got to climb over the gate, fetch the water dish and make it back over the gate before Boy could follow me too much. Attempt #1 was unsuccessful.  For attempt #2, I tossed in a handful of feed, dashed over the gate, grabbed the water dish, put it near the gate, re-scaled the gate and then poured water dish in the pan.  Phew!

For a non-pig adventure...
The warm weather was very nice and even woke up my spring bulbs that have been asleep all winter.  I can't wait until they all bloom.   One of my favorite things about spring is seeing all the flowers come up and bloom.


Back to pigs -
The pigs have been enjoying going out to pasture more in the warm weather as well.   Pepper has been taking her piglets out almost daily (except for the past couple days where we re-visited winter).
Side note: these pigs were much easier to feed than Boy while Kevin was gone.  :)

More new additions:
This past Saturday, we brought home Wyatt's 4-H pigs.  This will by Wyatt's first year showing livestock at the fair.  He is very excited about it and is taking great care of his pigs so far.  These pigs have their own special dwelling separate from our Large Blacks that Kevin ingeniously made out of an old corn crib.  I think it's really neat.


Because of the swine virus going around, there is not a regularly scheduled tagging day - everyone is responsible for tagging their own animal. Monday evening we tagged Wyatt's pigs. This was my first experience tagging an animal. It was a bit challenging to catch these guys since they are pretty good size. After watching Kevin catch them, it was evident that he would not be able to hold on to the pig AND tag the ear, so I had the privilege of working the tagger.  It was much easier than I thought, thankfully.  :)

EXCITING NEWS - we have our organic inspection scheduled for May 3rd!  We are looking forward to getting inspected and hopefully certified.

Also, if you are interested in farm fresh eggs, our hens are laying VERY well again.   $2.50 a dozen.